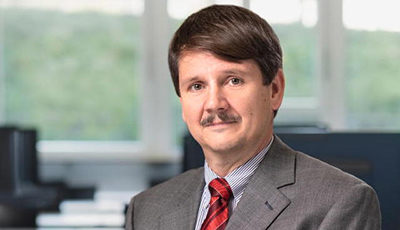 As of 1 August 2022, Burkhard Stiller took over from Renato Pajarola as Head of the Department of Informatics. Stiller is a full professor of «Distributed Systems and Networks» and joined the University of Zurich UZH in 2004.

After receiving his Dr.rer.-nat. (PhD) degree in Computer Science from the University of Karlsruhe, Germany, in 1994, he worked at the University of Cambridge, U.K., ETH Zürich, Switzerland, and University of Federal Armed Forces Munich, Germany. At UZH he is leading the Communication Systems Group CSG with its main research interests in fully decentralized control (blockchains, clouds, peer-to-peer), network and service management (economic management), Internet-of-Things (security of constrained devices), and telecommunication economics (charting and accounting).

In addition to his full professorship position at IfI, Burkhard is a member of the UZH Blockchain Center's Steering Committee and has actively been promoting Informatics in Zürich and Switzerland, being involved in events like the Swiss Digital Days or the Scientifica.

We congratulate him warmly and wish him much success in his new role.